In recognition of the service of this exceptional man, both to the EDU community, and to Allen Vanguard, the corporation has established a memorial award to be presented at the Explosives Disposal Conference (EDCON) of the Canadian Explosives Technicians Association (CETA) on an annual basis. 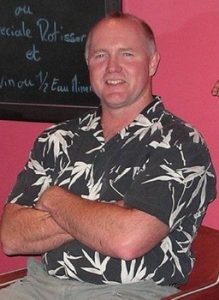 October 1960 – February 2006
As a young man, Ken Deane’s dream was to become a police officer. After leaving high school, he studied law and security at Fanshawe College and then joined the London police force. Following that he was accepted by the Ontario Provincial Police and soon joined the Tactical Rescue Unit and the Explosive Disposal Unit.
His courage and ability as a Tactical and EDU member is legendary amongst his peers within the Canadian Law Enforcement community. Tex’s contributions to law enforcement in Canada and the United States were renowned. In an often thankless job, he always performed his duties with excellence and pride.
While Tex demanded much of himself, he is most respected for his dedication to training and mentoring numerous Tactical and EDU operators in North America. He always shared a smile and had an encouraging word for those around him. In these leadership roles, Tex excelled. One need only speak to his colleagues to appreciate the esteem in which he was held by his peers. He was truly an icon in the Explosive Disposal community.
Complaining was a foreign concept to Tex and he would be the first to say that he never had a bad day on the job. He loved the job and the people in it. He is a superb example of what we should all aspire to be.

The executive of CETA will identify the Canadian EDU Technician that demonstrates character, leadership, courage and integrity, as exemplified by “Tex” Deane, to receive the award each year.
The inaugural award was presented posthumously to Ken and was accepted by his wife, Lucie Sirois and his sister, Judy Deane, on behalf of his family at the EDCON Conference on March 29, 2007 at the Sheraton Hotel in Richmond Hill, Ontario.

It is not for the critic who counts,
not for the man who points out how the strong man stumbled,
or where the doer of deeds could have done better.

The credit belongs to the man who is actually in the arena;
Whose face is marred by the dust and sweat and blood;
Who strives valiantly, who errs and comes up short again and again;

Who knows great devotions, and spends himself in a worthy cause
Who at best, knows in the end, the triumph of high achievement

And who, at the worst, if he fails
At least fails, while daring greatly
So that his place will never be, with those cold and timed souls,
Who know neither victory, or defeat.

This award is in honor of the achievements of Sgt Sam McCready of the Royal Canadian Mounted Police Explosive Disposal Unit. McCready was an explosive technician and instructor at the Explosives Training Unit at the Canadian Police College.
Sam was one of the cofounders of the ‘Monkey Tree Society’ a loosely formed social group of explosive technicians to enhance the esprit de corps and unity of this small national community. Sam is also known for having a significant role in the introduction of Canadian Police College instructors from a variety of Canadian police agencies to reflect a truly national perspective. . Sam bravely continued his commitment to the bomb community to his final days including social activities and, intelligence distribution
Sam’s love and commitment to bomb technicians is reflected in the parameters in winning this CETA sponsored award.
The Sam McCready Team Achievement will be awarded annually at the London Police joint training exercise hosted at the Ontario Police College. All teams will be eligible that participate in the training scenarios.
The successful team will be selected based on the following criteria;
• Successful completion of the training scenarios
• Clear display of teamwork, initiative and creativity
• Inclusive approach to all training activities
• Preference will be given to teams made up of mixed units
The winning team will be selected based on scenario administrator (s) evaluation based on the above criteria. Presentation will be made at the conclusion of the training session to the selected team by the training administrator and a CETA Board member if available.
The winning team will have their names inscribed on the Sam McCready award which will be displayed at the Ontario Police College. Further awards may be presented at the discretion of the CETA Board of Directors.